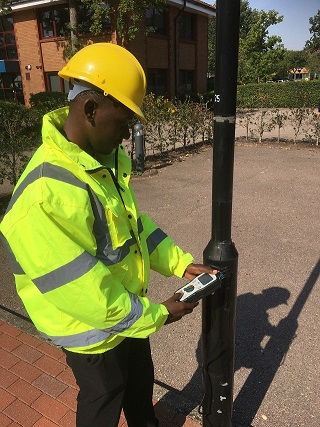 Lucy Electric Gridkey in partnership with Highways England and Kier Highways, has been announced as a category winner at the Highway UK Awards for their Cable Smart technology, which delivers significant safety benefits, energy, and cost savings for motorway lighting.

Remote monitoring delivers a substantial reduction in motorway closure time for inspection– something which every motorist will appreciate  – as well as the ability to pick up problems as soon as they occur, such as identifying inefficient operation, potential equipment faults and wasted energy that is costly for budgets and the environment. .

Lucy Electric is the technology partner in this Midlands motorway network pilot scheme for Highways England, working in partnership with Kier Highways which is installing our Cable Smart technology. We project that the installation of Cable Smart will result in 50% less night motorway closures for electrical safety testing, a projected saving of 500,000 work hours on the motorway per year.

Cable Smart pays for itself from the reduced costs of traffic management for closures alone – and of course there is the convenience for the motorist of fewer disruptions to their journeys. When rolled out nationally, we have calculated that Cable Smart will produce an annual saving of £3.4 million on the motorway maintenance budget for Highways England.

But alongside these savings comes a crucial benefit, both for the workforce and drivers – safety.

Safety on the motorway network is the number one priority. Cable Smart not only means safer and more efficient operation of the electrical network for lighting, but also means safer working for our personnel who no longer have to implement closures and examine and test lighting manually. And far fewer closures also means safer driving for motorway users.

We are extremely pleased to see Cable Smart named as winner in the ‘Asset Condition Monitoring and Asset Management’ category of the 2020 Highways UK Awards, which is testament to the hard work of all the Highways England, Kier Highways and Lucy Electric  team.

We are delighted by the recognition for this exceptional innovation which reduces the need for frequent testing and inspections thereby resulting in fewer lane closures affecting drivers as well as helping to keep the workforce safe.

Through continued investment in innovation and working closely with our partners across the industry, we are succeeding in making roads safer and improving journeys for drivers.