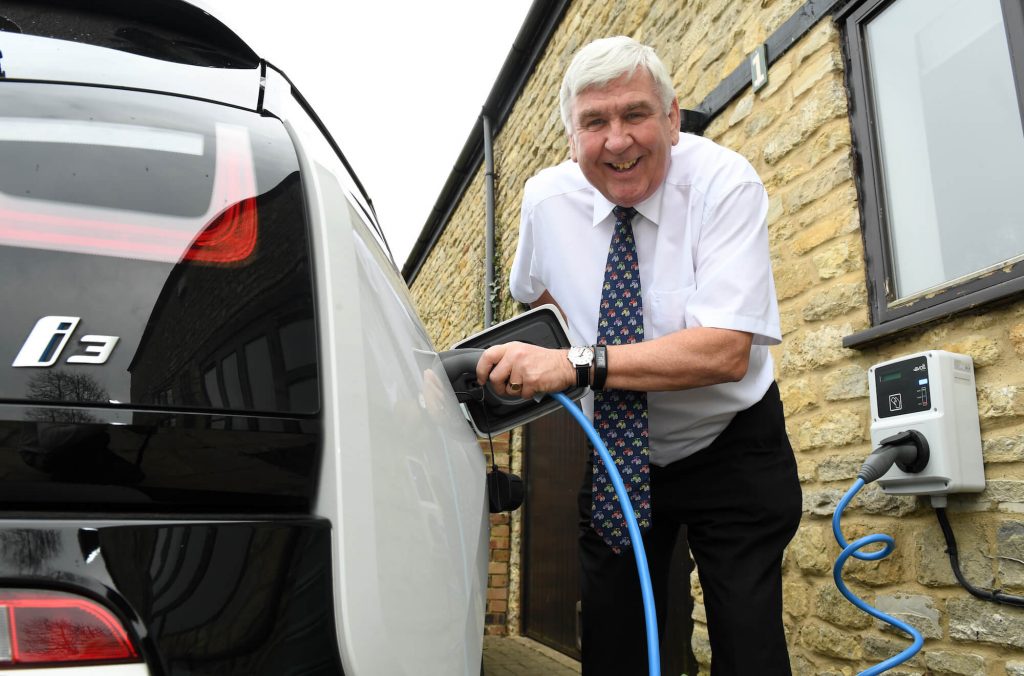 Electric vehicles could create an additional peak electricity demand of up to 18 GW by 2050, equivalent to an additional 30 per cent on top of today’s peak demand of 60 GW, according to one scenario in National Grid’s recently published ‘Future Energy Scenarios’ (FES).

In all the scenarios bar one, the report predicts a dramatic rise in electric vehicles (EVs), with sales being more than 90 per cent of all cars by 2050.

Electric Nation, one of Western Power Distribution’s (WPD) innovation projects, is trialling a smart charging solution to the potential challenge of EVs charging at home at peak times on local electricity networks. WPD Future Networks Manager, Roger Hey, said “Smarter charging solutions will complement more conventional network upgrades, and allow customers to benefit from a network that is safe, secure, reliable and economical.” WPD’s own regional energy scenarios predict that as many as two million electric cars will be on the road in the Midlands, South West England and South Wales by 2030.

One such EV driver is Keith McLean, a former Mayor of Milton Keynes. Keith has had his free home smart charger installed since the end of March 2017, and is delighted about being involved in the project. Keith explains:

I signed up to the Electric Nation project because I believed this was an important piece of research to enable the growth in the number of electric vehicles in the UK. The smart charger, which was provided free through the project, has charged my BMW i3 quickly and effectively. There have been a few requirements such as the need to take part in surveys, but these have all been part of the process involved in a trial that is aiming to learn new ways of doing things.

Alfen-ICU has been involved in a number of smart charging projects in the Netherlands over the past few years, with the broad objectives of minimising charging at peak times in the grid and maximising the use of renewable energy. Projects include reducing charge speeds at peak times, enabling end users to opt to charge based on the availability of locally-produced renewable energy, and having EV charging infrastructure in combination with battery storage and solar PV. We have proven that achieving these objectives is perfectly possible with our tried and tested technology and are very happy to be doing so as part of the Electric Nation project. The increased adoption of EVs doesn’t have to create any issues with our electricity grid infrastructure; smart EV charging infrastructure can support remote demand-response technology.

The UK Government has ambitious targets for the uptake of EVs, and sales are currently increasing at a rapid rate. An electric vehicle can more than double the demand on the local electricity network from a home when charging at peak times. If many homes in a local area adopt EVs, and they all charge at peak times, then the local electricity network will need greater capacity and intelligence.

The costs to reinforce such local networks – e.g. through replacing cables, overhead lines or substation equipment – has been estimated to be at least £2.2 billion by 20501. However it is expected that such costs could be reduced by the widespread adoption of smart chargers by customers willing to be flexible about when, or how quickly, their cars are charged.

In order to trial how smart chargers can help address the challenge of increasing number of EVs on local electricity networks, the Electric Nation project is recruiting new EV owners and providing a free* smart charger, so it can learn from the data – and the feedback – from trial participants.

The Electric Nation trial is taking place in the WPD network areas in the Midlands, South West and South Wales. It is seeking to recruit 500-700 people buying or leasing new electric vehicles (of all makes and models, pure electric and plug-in hybrids) to take part in the largest trial of its kind.

Places on the trial are filling up fast: the project recently achieved the half-way milestone of 250 smart charger installations, and over 2,000 people have expressed interest in joining the project. Therefore any new EV owners who want one of the latest smart chargers installed free of charge are advised to apply as soon as possible.

For more information and to check eligibility visit www.electricnation.org.uk